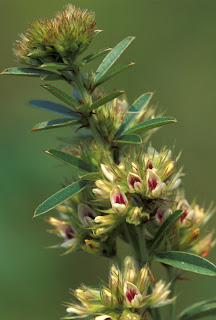 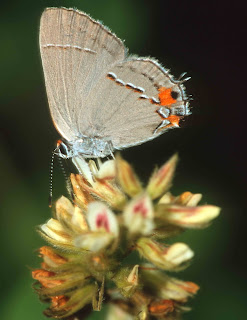 This 2-5' tall member of the bean family should be planted in a large cluster to get any type of showy appearance in the landscape.  However, I like it because it is quite drought resistant and builds nitrogen in the soil.  Plus the whitish covered leaves, whitish colored stems, and whitish flowers are pretty spectacular when backlit. It is easy to grow and pretty much carefree and can take full sun and moist soil although once established it can handle dry, rocky, or even clay soils.  The leaves occur in bundles of three and each leaflet is about 3" long x 1" wide.  The flowers are quite small In addition, the seeds of this plant are relished by quail, songbirds, mourning doves, wild turkeys and serves as a host plant for the northern and southern cloudy wing, hoary edge, and silver spotted skipper butterflies.  It is primarily pollinated by bees although butterflies will nectar on it, although they are not very effective pollinators.  This plant is high in protein and thus is readily consumed by deer, rabbits, and groundhogs.  This plant makes a wonderful addition to dried plant arrangements as the brown seed heads remain all winter long. 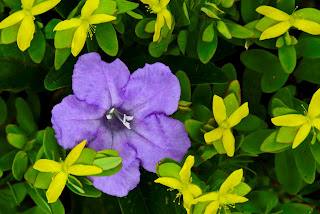 I was visiting a cemetery the other day in eastern Kentucky and as is typical, it was located on the top of a hill with shallow, acidic soils.  Looking upon the landscape and seeing the typical horticultural flowers gracing the graves, I noticed a natural garden, albeit very small flowers, gracing the grounds surrounding the cemetery.  In this natural garden I found wild petunia (shortened because it was mowed), white milkwort, and great masses of St. Andrew's Cross (H. stragulum to some).  This very low growing shrub forms large masses, usually several feet in diameter where the four petaled, 8 sepaled 1/3" long flowers are arranged in a cross shape with an egg shaped ovary.  The leaves are simple, somewhat waxy, slender and oblong in shaped and occur opposite on the stem and the subspecies most common in Kentucky is multicaule (mat-forming).  The other subspecies get much taller, in some cases 2-4' tall.  This plant would make an excellent ground cover for a rock garden or other dry, shallow, well-drained soil in full sun.  I was only able to locate plants at one nursery, Mulberry Woods Nursery.  This has a tendency to be evergreen which gives it an additional value in the landscape providing some green during the winter.  The other great advantage is that it will stay in flower for several months.

The hummingbirds are back at the feeder! 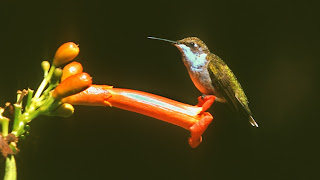 It never ceases to amaze me how people are so concerned with our tiny little ruby-throated hummingbirds when they don't see them in early spring.  I always tell them to have some patience, they will return in mid-summer and yes, right on schedule the hummers are back at the feeders.  Why?  There are several reasons: 1. The babies have now hatched and are out and about on their own and looking to "beef up" prior to their annual trek to the tropics; and 2. the migrants are now beginning that journey south and are looking for nectar sources.  Because of these phenomena, it should come as no surprise that the best hummingbird nectar flowers are now just coming into flower including the number one species of all time: trumpet creeper!  This plant produces as much as 10x more nectar than any other hummingbird plant.  But other species are coming into flower now as well including cardinal flower (another favorite and maybe hummingbird plant number two), jewel-weeds, red bee-balm, our native mallows, royal catchfly (a specialist for the hummingbird), false dragon-head, monkey flowers, and trumpet honeysuckle.  Now that the heat is with us make sure you keep the liquid in the feeder fresh and clean the feeder scrupulously so no bacteria or fungal diseases become associated with it that might harm the birds. Here is a little extra recipe for attracting hummingbirds and non-nectaring butterflies: mix old stale fruit (peaches, nectarines, melon, pineapple) with stale beer and sugar.  Put in a blender and place in a container in the shade on a platform.  You will be amazed at what will come into that mixture as shown with the pearly eye butterflies shown below.  Happy gardening and enjoy those flying flowers from now until frost. 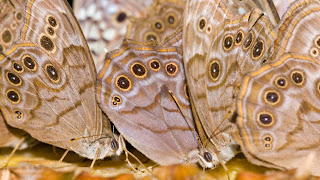 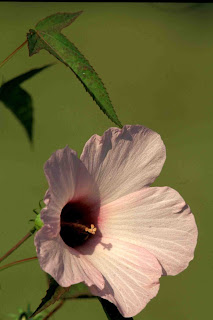 This native perennial gets its name from the arrow or halberd shaped leaves that occur on this species that is common pretty much across the entire state of Kentucky. It does best and is found naturally near wetlands, streams, ponds, and other moist soil habitats, but does just fine in the garden.  If you are planting in a wet area, be aware this species can literally take over the entire habitat.  Of course there are worse things than having a 4 to 6' tall showy plant with up to 6" wide hollyhock like flowers that range from white to pink to red (and yes I have seen all color forms in Kentucky).  The 5 petaled flowers have a deep maroon center with a very prominent staminal column.  The plant has a deep taproot but it spreads easily via seed.  I recommend cutting this species back in the fall of the year to maintain a more horticultural appearance.  This species is pollinated by bumblebees and an oligoletic  (means specializing on pollinating one species or groups of species of plants) bee that also feeds on wild morning glories.  The plant also serves as a host for gray hairstreak butterflies (buds and seeds), painted lady and checkered skippers (foliage) and some moths including the pearly wood nymph, Io, and Delightful bird-dropping moth. Unfortunately Japanese beetles will eat this plant and deer will also consume the non-toxic foliage as well.  However, this is a much better replacement in the landscape than the exotic Rose of Sharon bush, which is invasive.
Posted by Dr. Thomas Barnes No comments: 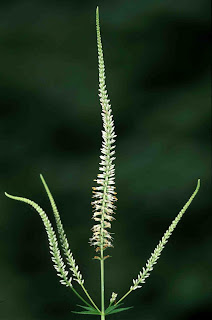 This elegant plant of the snapdragon family can grow up to 5' tall and when found on steep slopes has a tendency to flop over.  Because of this tendency, even in the garden, I like to put a nice patch of this surrounded by either little bluestem, broomsedge, or split-beard bluestem grasses.  When backlit in the late afternoon it makes a stunning display.  This single stemmed plant has whorled leaves that are narrow and oval shaped, with serrated edges, and are about 6" long by 1.5" wide.  The flowers begin at the base of the flowering stalk and the white tubular flowers have beautiful rusty brown to yellow stamens.  The flowers do not smell and the plant has a central taproot with some lateral rhizomes but it is not an aggressive spreading species by any means.  One established, the taproot makes moving this plant difficult.  It likes loamy, well-drained soil in the full sun but can tolerate clay. There are no major diseases known for this plant. This species has many notable medicinal qualities as Native Americans used it to stop nosebleeds and as a purgative and emetic. It can be very harmful if ingested and therefore it is not used much for medicines today.  The plant is named for a noted 118th century physician who made it popular at this time.  There are so many good companion plants for this species it is hard to list them all.  I like the look with an understory of butterfly milkweed and maybe wild quinine but I think wild bergamot, prairie clover, yellow coneflower, black-eyed susans.  There are at least three cultivars available and include 'Diane',  ‘Lavender Towers’ and ‘Fascination’.  There are a host of other cultivars on the market as well.  This is a great cut flower and works well in a naturalized meadow.  The primary pollinators are bees including honeybees, bumblebees, Mason bees, Green Metallic bees, and Masked bees.  Generally deer resistant.