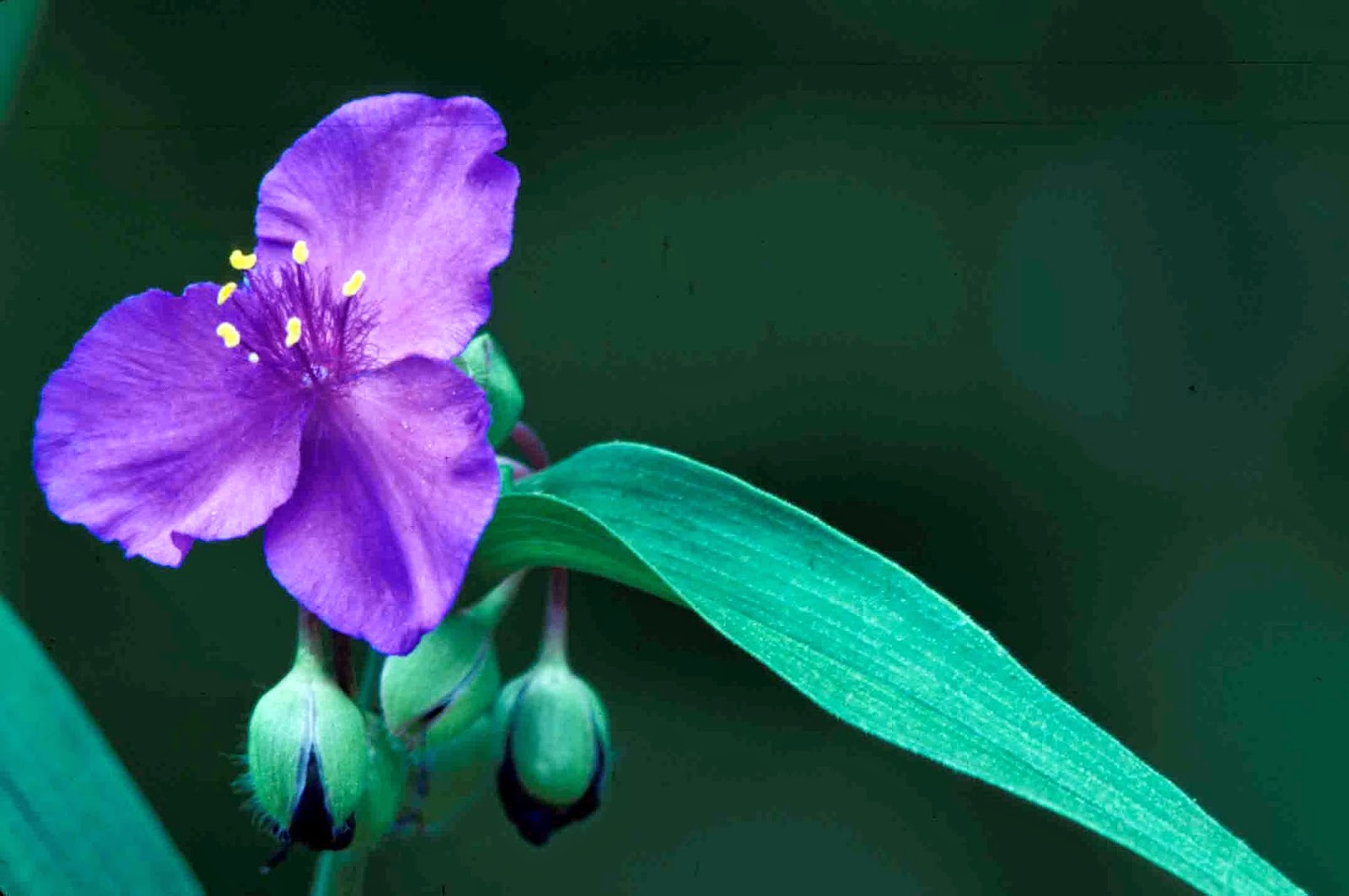 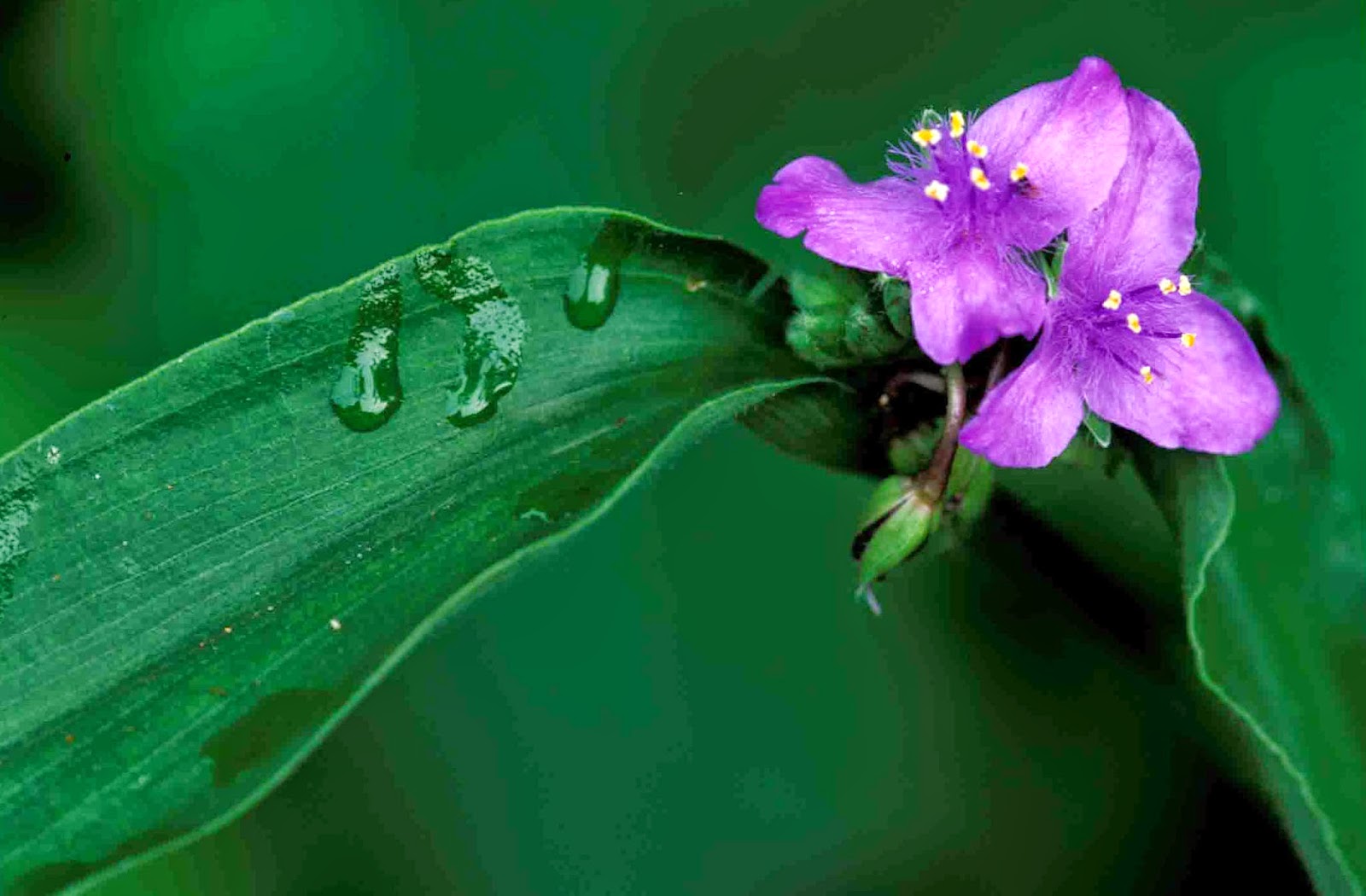 Kentucky has two species of early summer blooming spiderworts, Ohio and zigzag or wide-leaf (T. subaspera).  The more showy of the two species is definitely Ohio as it grows to 2-3' tall in full shade to almost full sun and will stay in flower until July or later.  The wide-leaf species flowers mostly in late-May and early June, prefers deep shade and does not flower as profusely as the former species.  Of course we also have a spring blooming spiderwort, the Virginia (T. virginiana).  The easiest way to tell the species apart is to look at the leaves in terms of the width and also the glaucous or fuzzy nature of Ohio spiderwort (top image).  These are very easy to grow and maintain species and will ultimately form a nice clump (Ohio much larger than wide-leaf) that can reach 2' across.  The flower color ranges from blue to lavender and occasionally white or pink.  Ohio spiderwort prefers dry to medium soils and is incredibly drought tolerant. As the clumps enlarge, they should be divided in the fall.  Each individual flower only stays in bloom for a single day.There are few to no disease or insect problems associated with this species.  It should be cut back in late summer to 6" to eliminate bad looking foliage and to stimulate a potential fall bloom.  It is pollinated primarily by bumblebees and the foliage will be eaten by deer, rabbits, box turtles and even livestock as it is non-toxic. This species is named in honor ot John Tradescant, the royal gardener of King Charles I of England and in 1637 his son brought the plant from North American back to England where it became a garden favorite.  The species name arises from found in Ohio. These plants have become somewhat of a biological indicator species of high radiation and constant chemical pollution as studies at Kyoto University in Japan and Brookhaven national Lab found that the normally blue stamen hairs turn pink when exposed to radiation or constant pollution. Spiderwort use by Native Americans used it as a cure for tarantism and the Cherokee used to make a tea to treat female problems and a laxative to treat stomach and kidney ailments.  The Lakota made a blue paint from the flower to decorate clothing and crushed leaves were used to make a poultice to treat insect bites and stings.  This species also goes by the following common names: cow slobber, Indian Paint, Job's Tears, Blue Jackets, Widow's tears, Moses in the Buhrushes, Dayflower, and Trinity flower. 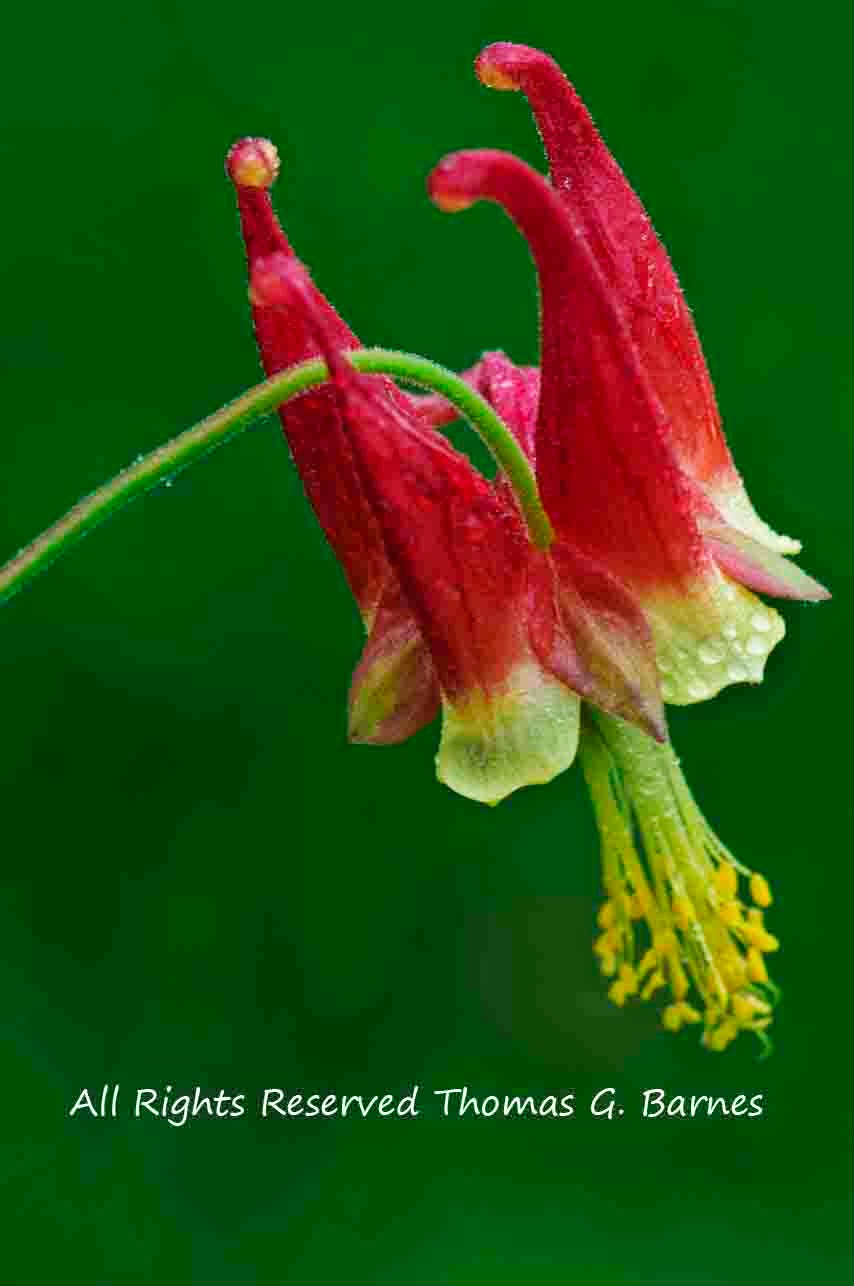 This is a uniquely an American Plant and is a great example of evolution in process.  There is only one columbine in Europe, it is mostly bluish in color, and is pollinated by bees which can see that color (hint there are no hummingbirds in Europe).  The American species, at least in the east, are red with five long tubes wherein the nectar is contained deer within the tubes so that only the strongest and biggest insects can pollinate it.  However, it is uniquely designed for it's primary pollinator, the ruby throated hummingbird. While this is the only native species in the  east, there are about a dozen in the West and of course the crowing beauty is the Rocky Mountain Blue Columbine, Colorado's state flower.  This is kind of an unusual plant in the buttercup family and the leaves closely resemble those of meadow rue.  The really great thing about this gem is that it is largely resistant to leaf miners, something that the horticultural hybrids are quite susceptible too.  This is an easy to grow species in partial shade to full shade (the full shade plants get taller and more spindly) and can tolerate quite a bit of sun.  They have a long flowering period of up to a month and they like limestone soils (they naturally grow out of limestone cliffs and rock outcroppings) but give it good soil (although a bit on the dry side) and it will give you years of enjoyment for it self sows readily and persists in the garden for many years.  The generic name is derived from the word eagle which is thought to be related to the shape of the flowers as the individual petals look like eagle claws. Native Americans used it to treat heart trouble, kidney and bladder problems, headaches, and fever.  They also used it as a was for poison ivy. It was reported to also be used as a love charm. 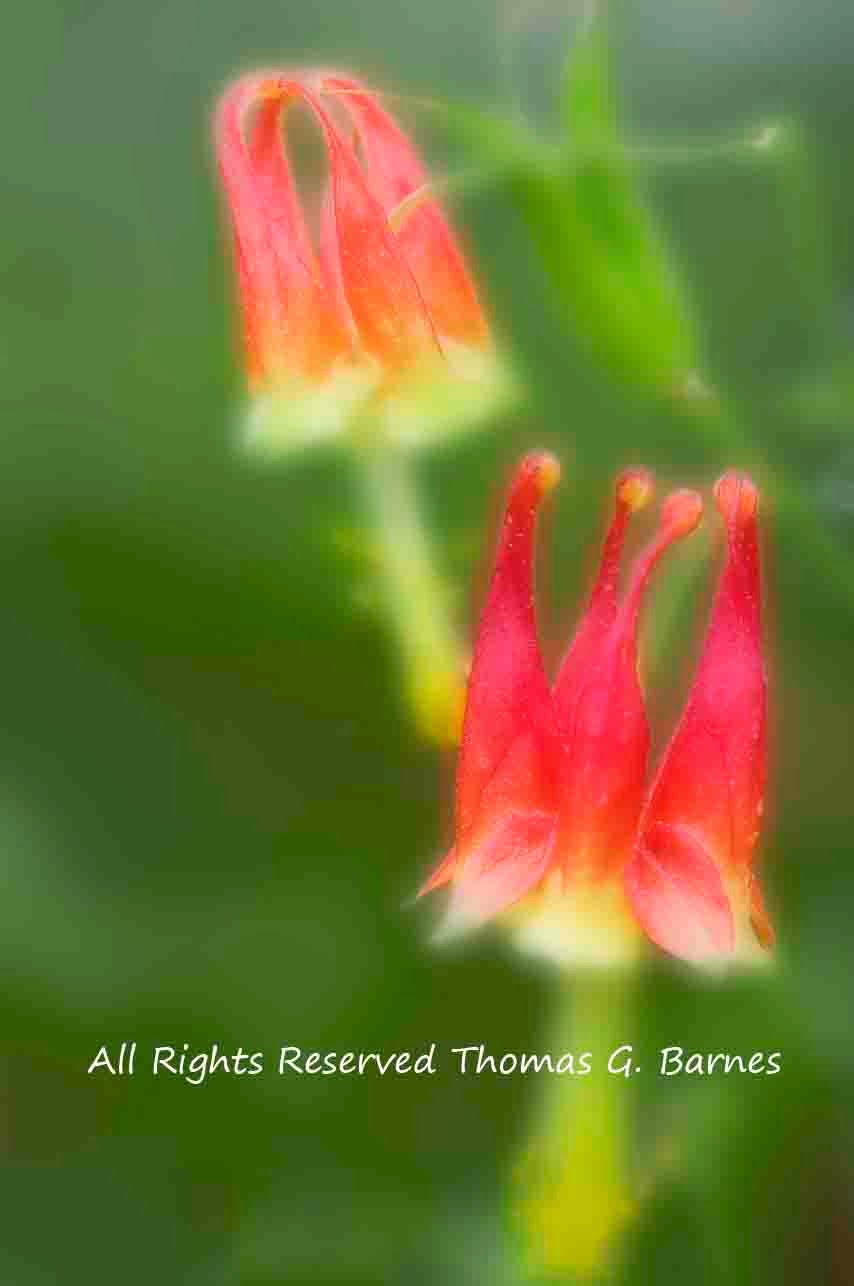 This is a quite beloved wildflower as John Burroughs wrote: "Our columbine is at all times and in all places one of the most exquisitely beautiful of flowers. " I like growing this with eared coreopsis, Appalachian beard tongue, and Christmas fern. 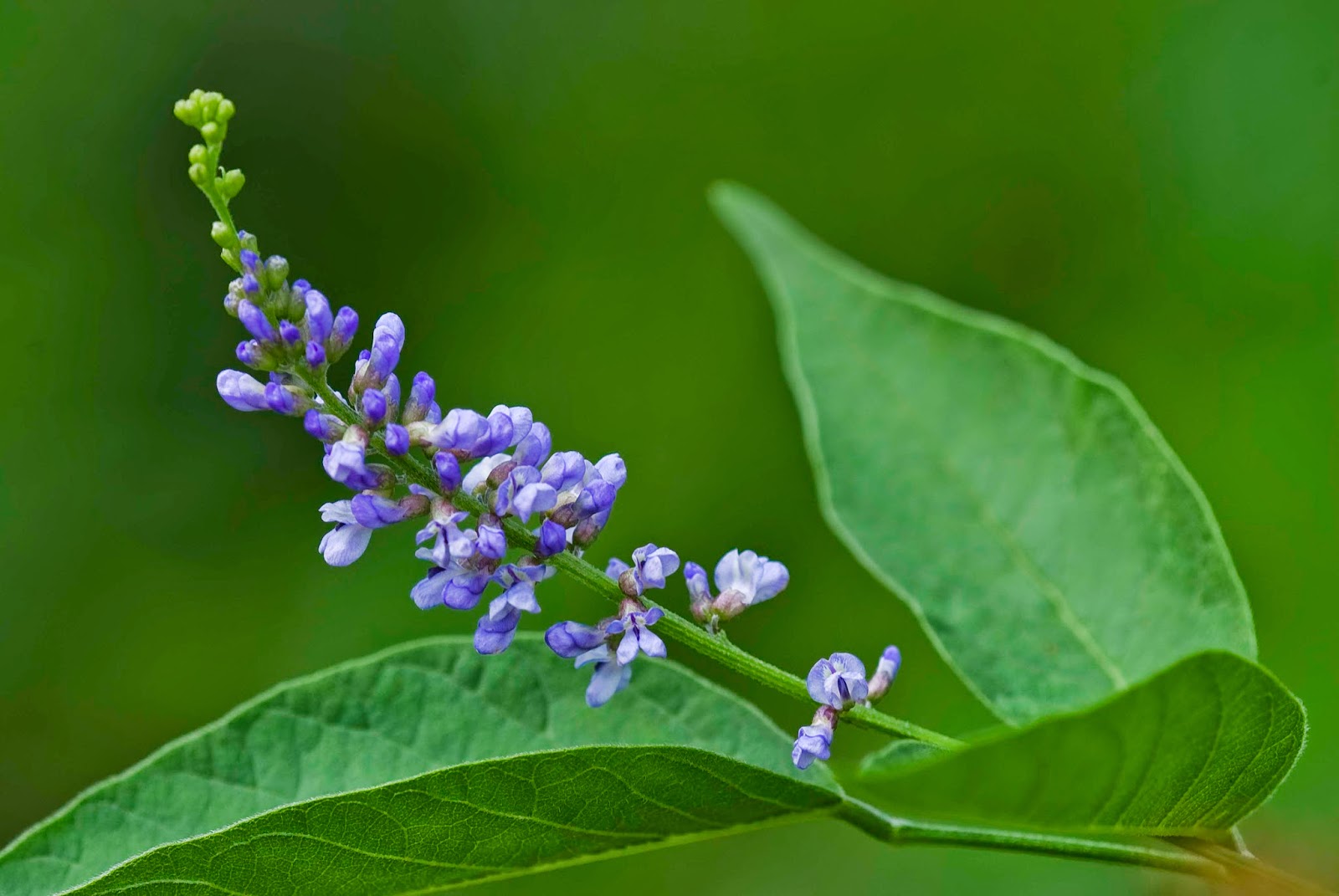 This member of the bean family typically flowers in late May and early June and can reach heights of 2-2 1/2' tall.  It is a much larger and robust species compared to it's cousin, Sampson's snakeroot (Psoralea psoraloides).  The up to 6" long trifoliate leaves have a up to 2" stem that appear off the slightly fuzzy or pubescent stem.  The 2 -6" long raceme of blue flowers (which can vary from light almost white to dark blue) appears at the end of each stem. When each individual flower is examined closely you can tell it has the typical bean family flower. This is a colonial species that spreads vigorously from rhizomes and hence given it's preferred habitat of rich, loamy soil it can form quite a large cluster of plants in a relatively short period of time.  It prefers well-drained soils and grows in the full sun. Most nurseries sell seed of this species and it is not that difficult to grow from seed as long as you scarify the seed prior to planting in a pot or the ground.  It is an uncommon plant in Kentucky and is found at the edge of prairies and in the barrens region. This species has been used for livestock forage in some parts of the world and it is pollinated primarily by bees.  One of the most fascinating things about this plant is that a few years ago a very rare moth caterpillar was found using this species, and only this species, in Ohio.  The adult moth has never been seen and there are no descriptions of the adult moth.  Prior to finding it in Ohio, it was only found in one location in Illinois, Indiana, and Kentucky. 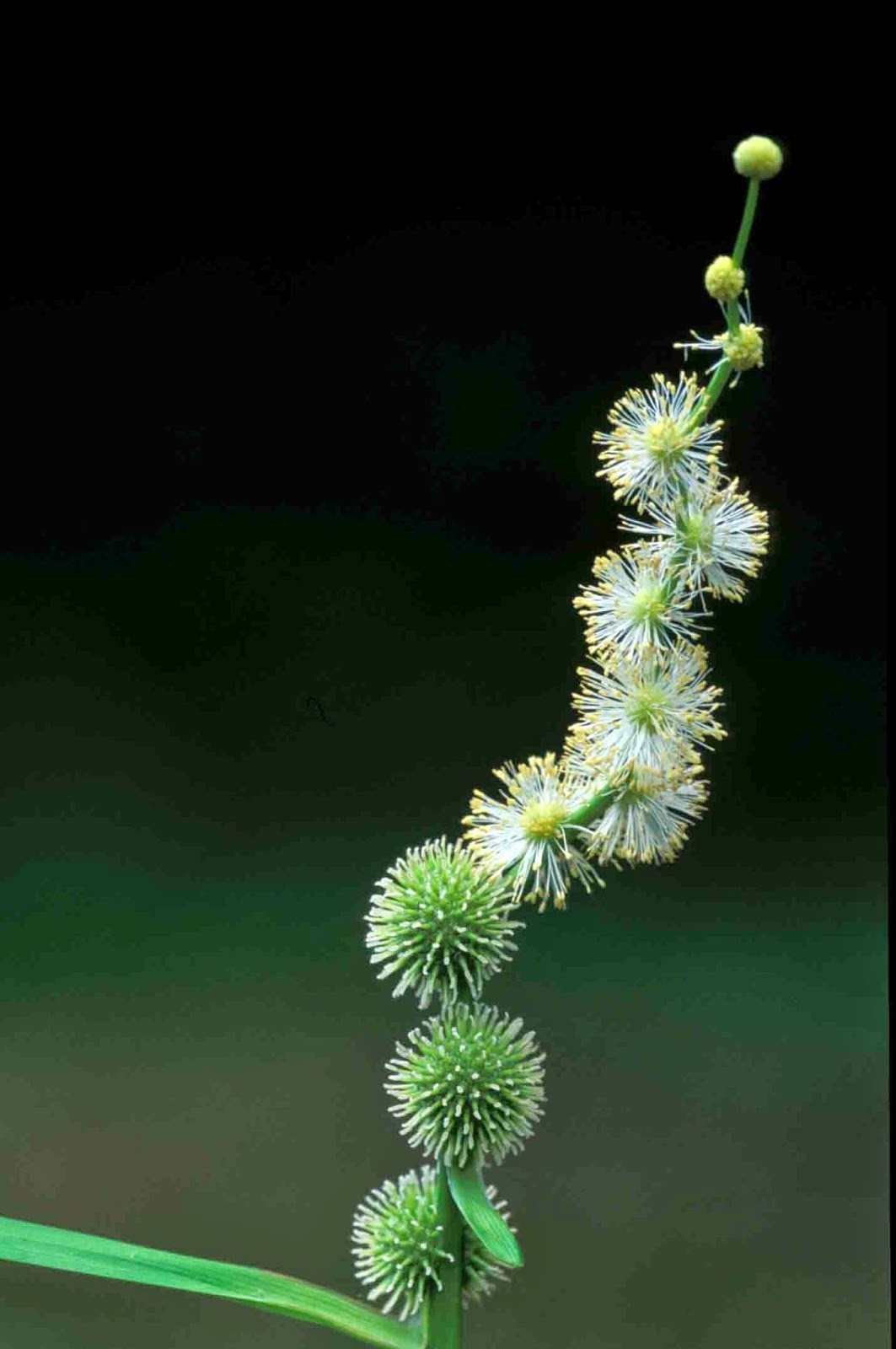 This is a native wetland plant that has some of the plant submerged under the water and can reach 2' tall.  It is however an excellent candidate for landscaping in a pond or water garden and for areas around the yard that are saturated with water.  It is an excellent cut or dried flower and is not a preferred deer forage.  In ponds it can form large mats and when it flowers in the spring it can be quite showy, especially when planted aside pickerel rush.  This plant resembles a sedge or grass like plant and in cross section the leaves appear triangular with a sharp keel (rise) in the mid-rib of the leaf.  The flowers appear in a cluster as white fuzzy roundish balls with bright yellow stamens.  The seed pods are equally as interesting and turn a brownish color in the fall. If planting in saturated soil, good companion plants would include pickerel reed, Virginia blue flag, copper, or zig zag irises and then the fruits would stand out in a grouping of cardinal flower and great blue lobelia.  It typically flowers in May to early June and has an extended blooming period hence it is a great water garden plant that can fill in with color and texture before the hot summer sun water lilies, lotus, and others species show off.