There are more ticks out there, and more of them every year.

For the past few years, I’ve heard more and more people commenting on tick populations. They say that they've seen more ticks, and earlier in the year. I've even made the same comments myself! When I’m out in the woods, it seems like I encounter more of them than ever. Especially the little guys—the tiny ones that some people call seed ticks. After walking for just a few minutes in the woods, I will sometimes find hundreds of these things crawling on me (and that’s after spraying myself with insect repellent). So, are there really more ticks in Kentucky?

A few researchers in other states and other countries have collected evidence showing that tick populations may indeed be moving and changing: more ticks in more places, and more often. The evidence is becoming more widespread, and is quite compelling. But if there are more ticks, why? Nobody knows this, either. Expanding deer populations? Climate change? One study suggests that increased acorn production may influence tick populations: more acorns = more rodents = more ticks.

Whether there are actually more ticks in Kentucky, though, remains an unanswered question. We have yet to conduct a rigorous study of their population numbers here. Maybe there really are more ticks, or maybe there there are simply more humans in the woods, doing more complaining!

Nevertheless, you don't need to conduct a study to know that there are lots of ticks in Kentucky, and that many of them would love to hitch a ride on you (or your pet) and grab a blood meal. And some of them are capable of transmitting diseases. So don't worry about how many ticks are there are in Kentucky. Instead, take a few simple steps to protect yourself from them.

The good news is that there are only a few kinds of ticks in Kentucky that will attach themselves to people and that the risk of getting an illness from a tick in this part of the United States is very low. Below, I will review the three types of ticks that are of concern in Kentucky, the diseases associated with them, and how to protect yourself from them.

Before you read another thing though, heed this advice: Don't be afraid to go for a hike in Kentucky. Of course, you should never hike alone, and you should take common-sense precautions (bring water! know where you're going!). But Kentucky is one of the safest places in the world to enjoy the outdoors. In Kentucky, venomous snakes and spiders are rarely encountered. We have no lions. No sharks. No malaria-infested mosquitoes. Take advantage of wild Kentucky. Don't let a few tiny ticks spoil your fun.

American Dog Tick
The American Dog Tick, Dermacentor variabilis, is probably the most common tick encountered by humans in Kentucky. As an adult, it is fairly large—almost as large as a watermelon seed, and as large as a small ball-bearing after feeding on blood. As its name suggests, this species is often found on pets. This tick is considered to be one of the primary vectors of Rocky Mountain Spotted Fever (RMSF), a disease that can be life-threatening when left untreated. RMSF is known to occur in Kentucky, but incidence in our state is low: just a handful of cases each year. (Read more about RMSF at PubMed Health.) The good news about this tick is that the larval stages (which could potentially be hard to find and remove because they are so small) are not interested in large hosts like dogs and humans. Also, this tick has not been shown to carry Lyme disease. Pictured below are adult female (left) and male (right) American Dog Ticks (Photo Gary Alpert, Harvard University, www.Bugwood.org). The University of Florida website has lots of additional detailed info about this species. 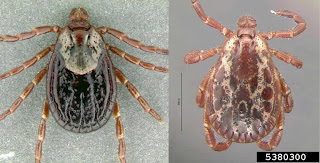 Lone Star Tick
The Lone Star Tick, Amblyomma americanum, is the only tick besides the American dog tick that is commonly encountered by humans in Kentucky. It is similar in size and appearance to the American dog tick except that adult females have a distinctive white dot on their dorsal surface. The very tiny (1-3mm) ticks that are often called "seed ticks" or "turkey ticks" are the larval stages of the lone star tick. These larvae can occur in very large numbers and they will attach to humans. Although lone star ticks are not associated with RMSF or Lyme disease, they may occasionally carry other diseases such as anaplasmosis or tularemia, so it is good practice to remove the larvae and adults as soon as possible. Pictured below are the adult male (left) and female (right) lone star tick (Photo Mat Pound, USDA Agricultural Research Service, www.Bugwood.org) 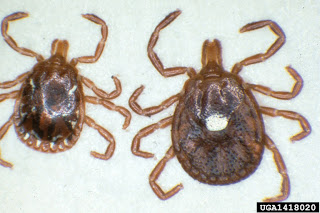 Blacklegged Tick
The Blacklegged Tick, Ixodes scapularis, sometimes called the deer tick, is smaller than the ticks shown above: it is about the size of a sesame seed when fully grown. It is not common in Kentucky, although there are scattered reports of it in our state. This is the only tick in the eastern U.S. that is known to transmit Lyme disease to humans. The tick, and the incidence of Lyme disease, is most prevalent in the Northeastern U.S., but a handful of people (a few dozen at most) in Kentucky are diagnosed with Lyme disease each year. They may not be catching the disease in Kentucky, though. A person can pick up the disease while traveling, and it can take weeks or months for symptoms to develop, so a Kentuckian who contracts Lyme disease in another state may not be diagnosed until long after they have returned. (Read more about Lyme disease at PubMed Health.) Many people confuse the very tiny "seed ticks" with the blacklegged tick, but remember that those are the larval stages of the lone star tick, which is not associated with Lyme disease. I spend hundreds of hours hiking in Kentucky forests every year, and I have never seen a blacklegged tick. Pictured below is an adult blacklegged tick (Photo Scott Bauer, USDA Agricultural Research Service, www.Bugwood.org). 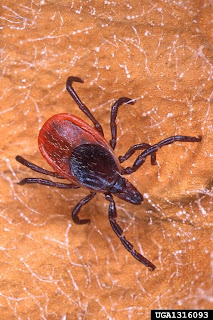 Defense
So there are three different ticks that are associated with a variety of illnesses. Seems complicated, but the best defense against all tick-borne illnesses is the same, and it consists of just a easy few easy steps. The bottom line: reduce the number of ticks that attach to your skin and remove any ticks as soon as possible. To reduce tick exposure, stay on cleared trails and avoid tall weeds and grasses. Also, wear long pants (tucked into socks) when walking through "weedy" environments. If appropriate, use insect repellents according to label recommendations. Inspect your body from head to toe (use a close friend to help!) several times per day when camping or visiting areas where ticks are common. Remove attached ticks by grasping the creature with tweezers just behind the point of attachment, and pulling. Don't use matches, vaseline, or nail-polish remover (they don't work!). Then, if you do notice signs or symptoms of an illness following a tick bite (especially flu-like symptoms or a rash), visit a physician and mention that you were bitten by a tick. Read more detailed tips at our online UK Entomology factsheet: Ticks and Disease. (And don't forget about pets: your veterinarian can recommend several effective and long-lasting pest-control solutions for your dog or cat).

So get outside. Enjoy Kentucky! Keep an eye out for ticks, but don't keep your mind on them.
Posted by Blake Newton