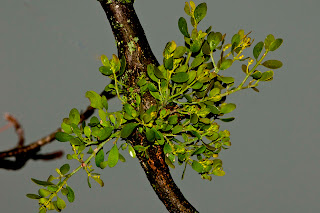 With the holiday season quickly approaching we are reminded of all those wonderful Christmas traditions like chestnuts roasting on an open fire (unfortunately American chestnuts have been mostly destroyed by the blight), boughs of holly and ivy (which were used to wisp away ghosts and demons and holly that sprouted from the footsteps of Christ with the pointed leaves representing the crown of thorns and the red berries representing his blood), and my favorite, mistletoe.  How this parasitic evergreen shrub became associated with Christmas is quite interesting.  The legend suggests it is associated with the Goddess of Love, Frigga and her son, the God of summer sun, Balder.  It just so happened that Frigga considered mistletoe to be sacred and that her son had a dream of death that disturbed Frigga.  So she went to air, fire, water, earth, and every animal and plant seeking a promise to cause no harm to her son and thus she assured her son everything would be okay.  Well, it just so happened that Balder's enemy, Loki, the God of evil, knew of one plant, the mistletoe, that Frigga forgot and hence he made an arrow of it and gave it to Hoder, God of the blind winter, who shot Balder dead. As soon as Balder died the world became dark and every living thing mourned his death.  But Frigga found some way to bring him back and began to weep tears which turned into the white berries on the plant and out of elation she kissed everyone that passed under the tree so that anyone who was kissed under the mistletoe would be blessed by love and no harm could come to them. The ancient Greeks, pagans, and Scandinavians had beliefs that this plant had life giving powers and would bring peace.  It wasn't until the late 18th century that the mistletoe ball came into fashion and a young lady standing under the mistletoe ball trimmed with festive decorations, could not refuse to be kissed.  And thus the tradition continues today.  What is the mistletoe plant really?  In the eastern United States there is only one species, Phoradendron serotinum, with at least three recognized subspecies.  There are at least 1,000 different species of this parasitic plant found worldwide and it gets its name from the Anglo-saxon "a twig with bird droppings" because it was thought to be propagated by bird droppings.  This eastern species is a hemi-parasite on the branches of its host plant and what this means is that it gets moisture and associated nutrients to grow in the water from its host plant but can manufacture, or photosynthesize, its own food.  It is known to occur on more than 200 species of trees although in Kentucky it seems to like walnut, American and red elm, and black cherry. The only connection of this plant to its host is through a structure called the haustorium which begins developing when a seed reaches a tree branch.  Each white berry has one seed, but multiple embryos, and as the embryo's develop in the first year, they develop root like structures that penetrate the branch of the host plant and ultimately form a lump or gall.  At this point, the plant then begins to grow and act as a hemi-parasite.  The bright green leaves range up to 1" in length and 1/2" wide and are covered with a thick, waxy cuticle to prevent water loss.  The plant can reach two to three feet in size and it is a perennial.  Given enough time, mistletoe can cause deformities and harm individual host plants.  This is a dioecious species meaning that males and females occur on different plants.  The white berries on the female plants begin occurring when they reach maturity at 3 - 5 years of age.  This is definitely a southeastern species which ranges from Texas and Oklahoma to very southern Ohio and Pennsylvania. The neatest thing about this species is that it is the sole host plant for the great purple hairstreak butterfly, which is a rare species in Kentucky with one population known from the Lexington area and another known from the Paducah area. 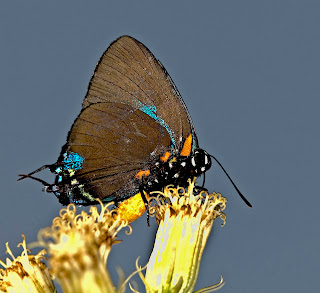 For a thorough treatment of the biology and natural history of this species, look for the publication: American Mistletoe (Phoradendron serotinum var. serotinum) Infection In Trees published by the University of Georgia at
http://www.urbanforestrysouth.org/resources/library/american-mistletoe-phoradendron-serotinum-var-serotinum-infection-in-trees/file_name
Posted by Dr. Thomas Barnes