Be on the lookout-Japanese Bloodgrass or Cogongrass (Imperata cylindrica) 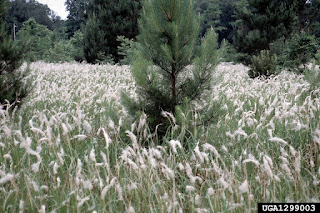 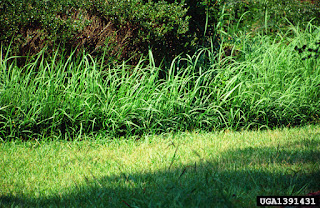 Planted in the yard.
Photo by John C. Byrd, Bugwood
It has been called a pandemic in the south and it is spreading northward and has now been documented in Tennessee. It is on the Federal Noxious Weed list and is considered one of the top 10 worst weed species in the world.  It has infested more than 153 billion acres around the world and people keep right on planting it!!!  It is widely available in the nursery trade and all over the internet.  The promoters of a cultivar called "red baron" make claims, which are unsubstantiated, that this species is not invasive although the Missouri Botanical Garden has observed that once it loses the red color from the leaves, it becomes invasive.  The nursery industry calls this plant Japanese Bloodgrass because of the red and lime colored leaves.  It is definitely a southern plant and was originally established in Grand Bay Mississippi in 1911-12 and has spread to over a million acres in Florida and hundreds of thousands of acres throughout the southeastern United States.  It is considered a potential pest for most of the eastern United States and the Pacific Northwest.  This species is very aggressive and is generally unpalatable for livestock.  The question is, "Why should we care in Kentucky?"  The answer is quite simple.  We continue to allow it to be sold in the landscape trade and it will become invasive over time, this we know.  We need to be on the lookout for this plant and do not plant it in the landscape because we need to eradicate an infestation as soon as it is documented.  It is very, very difficult to control (strong herbicides are used at a cost of more than $200 per acre) and once it becomes established, game over.  This may finally be the one species that gets the attention of the Kentucky Nursery Association because it will outcompete fescue and cows will not eat it, hence it poses a significant threat to one of our signature agricultural industries, beef cattle production.  Now is the time to visit local nurseries and help educate them about this plant.  Go to www.cogongrass.org for more information about this horrible plant and if you should be chance see it where it has escaped, let authories know immediately so it can be documented and destroyed.
Posted by Dr. Thomas Barnes 2 comments: 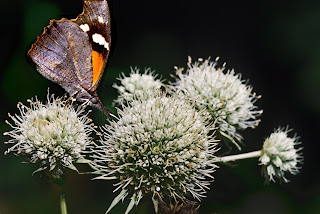 Snout on rattlesnake master.  Notice the 5 white petals on each individual flower. 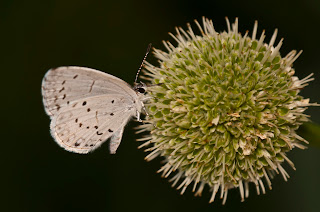 Summer azure on rattlesnake master ball
This true tallgrass prairie species is one of the most unique members of the Carrot family and makes for a wonderful cut flower, works well in dried flower arrangements, and attracts butterflies.  It has an extended flowering period sometimes lasting all summer.  The plant gets its name because the Native Americans used the dried seed heads as rattles and the early pioneers believed the roots were an antidote to rattlesnake bites, which of course they are not.  This 2-5' tall plant has long strap-like leaves with stiff, short widely spaced hairs that resemble a yucca plant, although there is no relationship.  The entire plant is smooth and has a bluish to grayish tint to the foliage.  The tiny individual flowers are contained within a 1 - 1 1/2" ball that is whitish to greenish color and each tiny flower has 5 petals and there are sharp sepals at the base of the flower ball.  This is a very easy species to grow in the garden and it likes full sun, can tolerate typical soils found in urban environments, and once established, is very drought tolerant because it has a central taproot.  This species has no serious disease or pest issues.
Posted by Dr. Thomas Barnes 1 comment:

Plant of the Week: Cream Gentian (Gentiana alba or flavida) 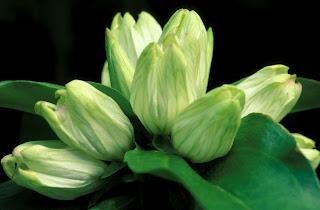 This is the first of the gentians to begin flowering in late July to early August.  It can be differentiated by all other gentians because it lacks blue in any part of the flower.  The 1 1/2" tubular flowers occur in a cluster atop a one to two (sometimes three) feet tall plant with typical gentian leaves that are lance shaped and about 3" long and 2" wide.  The white (sometimes off yellow or green) flowers have no fragrance and bumblebees are the primary pollinators.  This is a pretty adaptable plant for the garden because it can tolerate some clay in the soil but likes more moist to average garden soils so that the long taproot can grow deep into the earth.  It can tolerate full sun but the leaves may show some yellowing and prefers partial sun.  The leaves have a bitter taste and so it is probably not a preferred deer browse species.  The genus name comes from Gentius, King of Illyria around 500 B.C.  The species name comes from Latin meaning white. Gentiana alba was first published by Muhlenberg in 1818 and Gray in 1846 first called the species Gentiana flavida. They are the same plant and some experts consider G. alba to be the correct name because it was published first, but other experts consider G. flavida to be the correct name because of a belief that the Muhlenberg publication was invalid under the International Code of Botanical Nomenclature.  The native range for this species is from Canada down to Oklahoma, Arkansas, and North Carolina.  It most often thought of as a prairie or grassland species but also occurs in open woodlands and savannas. In Kentucky it is considered a rare species but it is widely sold in the nursery trade.  There are some interesting notes about this species in that it will hybridize with G. andrewsii giving a different looking flower that is cream colored with light blue tints at the edge of the petals.  In Kentucky, the time of flowering precludes hybridization in the wild, but it is something a hobbyist might undertake.
Posted by Dr. Thomas Barnes 1 comment:

Is Butterfly Bush Invasive? Should we plant it in urban areas? 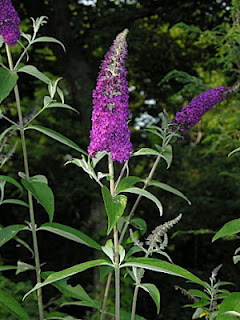 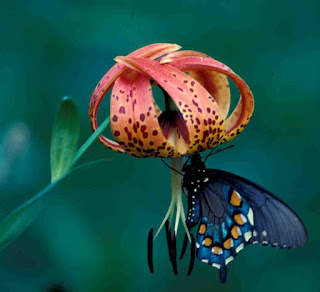 Glad to be back in Kentucky after a week of being in the northwoods.  Not so good is the continued hot, dry conditions we find here in the state. So perhaps it is time to think about getting into the shade and enjoying the shade garden.  But this time of the year, what is in flower in the shade garden?  Actually there are a few showy species including black cohosh, bear's foot, hedge nettle, germander, tasselrue, spikenard, and the showiest of all, the lilies, both Canada and Turk's Cap.  The easiest of the species to find in the nursery trade is the Turk's Cap Lily.  As with most shade garden plants, this species does not like clay but rather a rich organic soil and it does like some sun, maybe early morning or late afternoon, but it does not like drought, hence it might be one species you need to water this time of year when it is dry. Furthermore, this is one native species you should probably mulch. If you get a plant that likes where it is at, it will grow up to 7' tall and have multiple flowers on the plant, sometimes up to 10 or 15.  In addition, it will spread via stolons and you can get a nice patch in the garden, but only if the conditions are right. The petals are nicely recurved and the distinctive identifying feature is the green throat in the center of the flower.  The best companion plants would be cinnamon and royal ferns with black cohosh.
Posted by Dr. Thomas Barnes No comments:
Newer Posts Older Posts Home
Subscribe to: Posts (Atom)