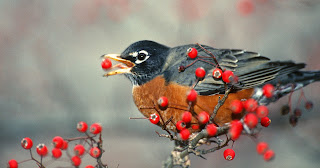 The berries are now ripe on Winter King hawthorn and the birds are attacking them like crazy.  This cultivar of the native green hawthorn is an outstanding fruit producer and birds, such as the robin and cedar wawwing, love the bright red berries this time of the year.  But this is truly a four season tree, it produces clusters of white flowers in the spring, has nice greenish gray foliage in the summer, bright red berries in the late fall, and exfoliating bark in the winter that reveals an orangish coloration to the trunk.  It is a small tree growing to 20' tall or so and has a vase like form. Unlike many hawthorns, it does not have a prolific number of thorns and it is quite disease resistant. The flowers, which appear for several weeks in May, are not very fragrant or have a pleasing smell. This is a fairly widely planted tree because it tolerates city pollution and urban clay soils.  It does best in full to partial sun with well drained soils but is adaptable to a wide variety of conditions, particularly if the soil drains well.  It will grow on a wide range of soils from acidic to alkaline.  This species can be used as a specimen plant, in mass plantings, and borders. For all you bird watchers out there, this appears to be a good backyard feeding year and red and white-winged crossbills have been seen eating hemlock seeds and the red-breasted nuthatches appear to be prolific.  We have even had pine siskins for almost 6 weeks now, so if you want to attract some good backyard birds, keep planting those good native plants like the 'Winter King' hawthorn.
Posted by Dr. Thomas Barnes No comments: 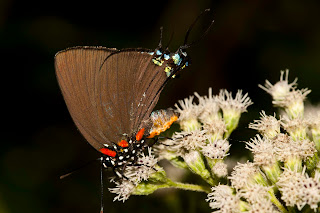 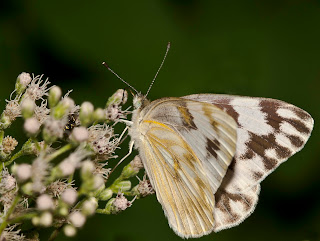 Boneset is butterfly magnet in late summer and early fall.  It is especially attractive to small butterflies like the hairstreaks (great purple shown above), checkered white (shown above) and the sulfurs.  The flowering period coincides with the period where several rare to uncommon butterflies appear like the White-M hairstreak.  It is a bit of a weedy species and escapes around the yard but it can be controlled by deadheading and pulling young seedlings. I can not tell you how many different species of butterflies I have photographed nectaring on this plant but it is substantial.  Boneset is kind of a wetland plant that can grow to 4' tall and can have some smallish branches arising from the primary stem.  Each individual plant has many flowering heads and many flowers in each individual head.  It gets it's name perfoliatum from the perfoliate leaves where the two 4-8" long tapered leaves appear to be perforated by the stem.  The leaves have sharp tooted edges and are quite rough to the touch.  The flowers have an aroma that is slightly aromatic and the leaves are quite astringent and bitter.  This plant has been considered for its medicinal uses for quite some time.  It is listed in the United States Pharmicopia and has been used as a stimulant, laxative, and mostly as a febrifuge.  It acts quite slowly over time and is a mild tonic when taken over time in small to moderate doses and as an emetic or purgative when taken in large doses.  It is often used to fight colds and fever and one standard recipe is to infuse 1 oz dried herb to 1 pint boiling water and served hot at a rate of about 1 wineglass full per hour. There are significant issues related to the long term use of this herb as it has been shown to damage the liver because of the type of alkaloids present in the plant.  As with all herbal medicines, you should consult your doctor and pharamcist before taking any to ensure there are no side effects or drug interactions. 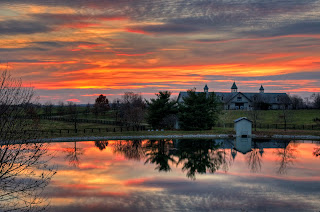 At this time of the year I wish to express my thanks to all the faithful readers who have hopefully learned something about native plants this past year.  I have enjoyed providing this source of information to you and hope it has been useful.  As my way of saying thanks here is a photograph of a quintessential Kentucky scene for your holiday enjoyment.
Posted by Dr. Thomas Barnes No comments: 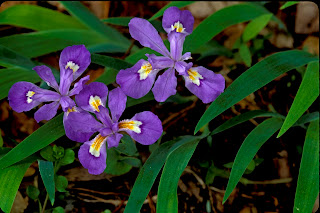 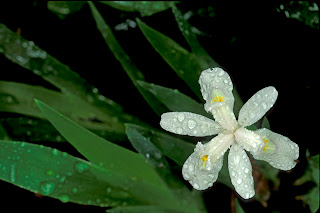 This is one of our most common woodland wildflowers and should be a main stay in any shade garden.  While it will grow in deeper shade, it does best if it gets some sun, a few hours of day if possible and will grow in full sun if the soil stays constantly moist.  It will tolerate a wide variety of soil types and prefers calcaerous soils but it will grow quite well in more acidic soils with the addition of lime.  This is a species that likes rich humus and moist soil. If it likes where it is growing, it will form a nice large group and a mixture of the dark purple, light purple (eco bluebird or powder blue) and white forms (alba) is quite spectacular. This species gets its name from the yellow crests on the sepals.  The 1/2 to 3/4" wide leaves arise from very shallowly rooted rhizomes.  After flowering it can be easily divided. About the only problems might be slugs or snails and it is not a preferred deer plant. Excellent companion plants are numerous and foamflower works well, wild blue phlox, wild bleeding heart, green-n-gold, and one of my personal favorites is yellow trillium surrounded by this iris where the trillium stands above the iris (and this trillium is a bit later blooming in KY).  This is a very easy wildlfower to use in the garden and is a great beginner plant for those who have any hesitancy about using native plants. 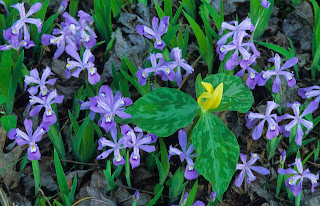 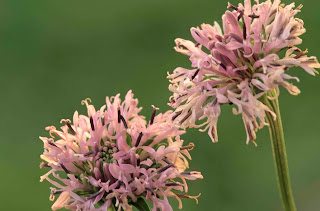 One of the biggest complaints about using native plants in the landscape is that they get too tall and are not showy enough.  While this generalization proves true for some of the prairie or open meadow species, it certainly does not pertain to this species.  This species will form a 10" clump with leaves that protrud 6" or so from the ground and when it flowers in May, sends up flowering stalks that are usually no longer than 18", if that.  Furthermore, the individual heads are more than 1" to1 1/2"across and when placed in a group, will have many, many flower heads per clump.  This member of the daisy or aster family is a globally rare plant that occurs from Pennsylvania down to Tennessee and North Carolina and is considered endangered in Kentucky.  It usually grows along the edges of streams or on gravel bars of rivers where water scours them occassionally.   Obviously then this species likes wet soils (not clay) that drain but where the water table is close to the soil surface.  They flower best in full sun but can handle some late afternoon shade.  They can be easily propagated from seed or division and can form a nice clump rather quickly.It was named for 18th century plant lover, DR. Moses Marshall.  Several nurseries carry this species and it is well deserving of a spot in any native plant garden.

The Blacklegged Tick in Kentucky

A few months ago, we posted a guide to the three most important tick species that are found in . Since then, we have learned that one of those ticks, the so-called blacklegged tick, Ixodes scapularis, may be becoming more common in the south, and that several of these ticks have been found on humans in the eastern part of the state. This information was reported by Extension Entomologist Dr. Lee Townsend in a recent article in the Herald Leader.

These findings are significant because the blacklegged tick is the species that is most closely associated with Lyme Disease, a serious illness that has become prevalent in the northeastern . The good news for Kentuckians is that very few of these ticks have been found on humans in our state. Also, recent research suggests that—while blacklegged ticks are actually fairly common in the south—they are less likely to spread Lyme Disease than they are in the north. This might be because blacklegged ticks prefer different hosts in the South (reptiles) than they do in the North (mammals). You can read more about this study here, and here.

So the risk for Lyme Disease in remains very low. Nevertheless, this is a great reminder for anyone who spends time outdoors: ticks are out there, and they can spread diseases. And not just Lyme Disease. As we mentioned in our previous post, the other, more common tick species (such as the American Dog Tick and the Lone Star Tick) can also transmit diseases, including Rocky Mountain Spotted Fever, that can be just as serious as Lyme Disease. The one difference with the blacklegged tick: these ticks are active in cool months, so if you are outdoors in the fall and winter, it is still a good idea to practice tick-safety.

For detailed tips about how to keep yourself safe from ticks, read our UK Entomology Factsheet, Entfact-618.