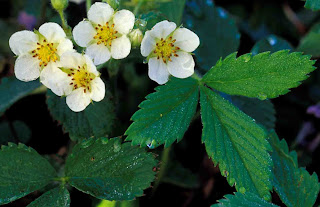 The wild strawberry is one of those native plants that provide fruit that is edible by humans and a variety of other creatures.  The fruits, smaller than horticultural varieties but much sweeter and better tasting, is now ripening in the fields across the Commonwealth.  This is a low growing loose colony forming perennial that has trifoliate leaves with each leaflet about 3 inches long and 1 inch wide.  The five-petaled 3/4" wide flowers bloom in early spring with fruit usually arriving about this time of year.  This plant likes full sun to partial sun and loamy soils if possible.  It produces long, hairy runners about 2" long which will produce more plantlets.  The most important pollinators for this species are small bees although some flies and skippers will also visit the flowers.  A wide variety of birds and mammals will readily eat the fruit.  There is a very nice Native American folk legend about strawberries that does something like this.  Soon after the Great Spirit created the first man and woman they got into an argument.  Because of this, the woman ran away and left the man, who became lonely and sad and began to weep and moan.  The Great Spirit heard the cries from the man and asked him if he wanted the woman to return.  The man said yes and if she returned he would never fight with her again. So the Great Spirit told the man to go find the woman.  Well the woman had a tremendous head start and so to slow her down so the man could catch up to her, he placed a large patch of blueberries in her way hoping she would stop to eat.  However, she was so mad she ignored them. The Great Spirit then tried raspberries, currants, and blackberries, all to no avail.  The woman was so angry she ignored the thorns and her clothing that had been ripped to shreds.  Finally the Great Spirit decided to create a new fruit growing near the ground.  The woman had never seen this fruit and was intrigued and she ate some berries.  It was so good, she actually stopped to pick some to eat them and the man caught up to her.  He apologized and they made up and the strawberry was shaped like a heart because it symbolized the love between the man and the woman and the Native Americans called the fruit, heart berry. This species and one from Chile are the ancestors of our domesticated strawberries that we purchase at the market. 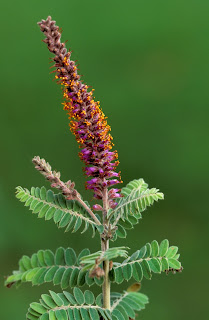 I remember years and years ago when I took my first range management course and we discussed plant increasers and decreasers (those that increase with grazing and those that decrease) and leadplant was high on the list of decreasers because it is not tolerant of heavy grazing, fire exclusion, or frequent mowing.  It's absence from tall grass prairie systems indicates the prairie is in poor ecological condition.  This is because it is a highly palatable and highly preferred browse species relished by most grazing animals, including deer.  It is an amazing legume because one single plant can produce more than 3,000 seeds, it is an important source of nectar for butterflies and more importantly, honeybees, which also eat the pollen.  At least 47 different insects feed on this plant.  Another amazing fact is that the taproot can extend 2 to 20' deep into the soil which makes this species quite drought tolerant. It is also very good at fixing nitrogen in the soil.  This also makes a fine garden plant and can be used in rocky, gravelly, or loamy soils that are dry and well-drained.  It grows to about 1 to 3' although if burned or grazed it can maintain itself as a relatively short (1') plant.  It typically flowers in July through September and it can re-sprout from rhizomes or root crown if the top dies back. The bi-pinnately compound leaves may have up to 50 leaflets and can be up to 12" long and have a whitish soft or grayish green appearance.  The stems are hairy.  Each flowering spike can be up to 4" or more in length and it is striking to see the bright yellow anthers against the purple flowers.  If you are a honey producer, this is an outstanding plant to use for bees.  It can stay in flower for up to a month, giving you plenty of time to enjoy the varying textures and colors of this small shrub.
Posted by Dr. Thomas Barnes 1 comment: 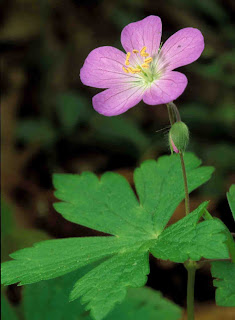 Wild geranium is one of the easiest, and showiest of the late spring woodland wildflowers.  I love this plant because it forms nice clumps and when combined with eared coreopsis in part sun, the lavendar and yellow color combination is quite stunning.  This shows and individual flower, but when mature it will have clusters of the five petaled lavendar flowers standing tall about about 18" and spreading out about the same.  It is quite drought tolerant, deer and rabbits don't really like it and it will tolerate tougher growing requirements than most native woodland wildflowers.  Like blue phlox and foam flower, this is a staple in the native woodland wildflower garden.  The leaves are also quite interesting and are deeply cut five lobed palmate that can reach 4 to 5" wide.  Some people call this plant crane's bill because the seed pod does in fact resemble a beak of sorts. In fact, geranium in Greek means crane.  These plants are pollinated by a variety of bees, including bumblebees, and butterflies and skippers.  Native Americans used the plant as an astringent to contract tissues and stop bleeding and also to treat toothache and hemorrhoids. There are a few cultivars out there including album with white flowers, Elizabeth Ann with bronze colored leaves, and Beth Chatto with fingered leaves.  Good companion plants include eared coreopsis, dwarf crested iris, Indian pink, spiderwort, and of course native ferns.  Give this wonderful plant a try in the garden because it is so easy to grow.

Plant of the Week: Jack in the Pulpit (Arisaema triphyllum) 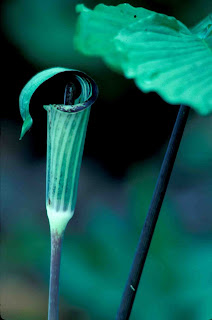 This is one of the most unusual of all the native woodland wildflowers. When you say you are looking at the flower, you are not really looking at the flower but rather the inflorescence or cluster of flowers because the individual flowers are tiny and hidden in the "jack" which is located inside the rolled leaf-like structure, the "pulpit." This is a unique species in that individual plants are either male or female.  Most plants have both flowers on the same plant.  In this species to see the individual flowers, which are located at the base of the spadix (the pulpit) inside the jack or jill as it may be which is called the spathe.  If it is a jack you will see tiny yellow to brown thread like anthers and if it is a female you will see tiny green berries. All members of this mostly tropical plant family has a similar structure and while rare in nature, people are familiar with this family because of the calla lilies, peace lilies, philodendron, and caladiums.  Most people are unaware that this plant can change sex multiple times over it's 20 year lifespan.  Plants that have grown for a sufficient number of years that get large enough and have enough resources are often females.  However, when times get tough, they can revert to becoming a male or non-flowering plant.  So what determines the sex of this plant?  We have all heard the rumors about size and does size matter?  In this species the answer is definitely yes, size matters! Bigger plants are usually female plants. The sex of the current year’s plant is determined by the size of the previous year’s root storage structure, called a corm. Larger corms yield females, while smaller corms yield males or nonflowering plants. In addition, in those plants that have produced larger clusters of the red berries, the next year they are most likely going to be male plants. Another factor affecting sex is that skunks, slugs, and deer will devour these plants, even though they contain oxalate crystals that makes them distasteful.  Since this species has both male and female flowers, how do they get pollinated because the flowers are not accessible to bees?  Basically, the jack produces a fungus type odor that attracts its primary pollinator, the fungus gnat.  Unfortunately, once the female fungus gnats get down to the base of the flowers, the tube is too slippery and they can not get out, hence dying at the bottom of the tube along with their valuable pollen.  If the flowers were pollinated the red berries will begin to grow and by the end of the summer the female plants can have large, showy clusters of red berries. Immature plants usually one have one leaf with three leaflets and mature plants typically have two leaves with three leaflets each. These are easy to grow in the woodland garden as they tolerate a wide range of soil pH and it appears about the only thing that will kill the corms is excessive water in the winter and spring.
Posted by Dr. Thomas Barnes 1 comment:
Newer Posts Older Posts Home
Subscribe to: Posts (Atom)