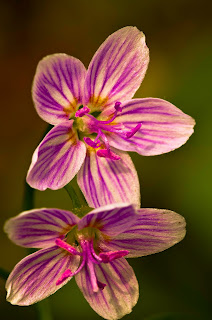 Some folks consider these delicate spring wildflowers to be weeds because they flourish in older, established neighborhoods and carpet the ground in spring.  I love them because it looks like a spring beauty winter when the yards are all white.  I love them for their use in a woodland wildflower garden because they can act as a "filler" between some of the larger, and more showy species.  These gems, unique in the Purslane family, grow about 3" tall and have long, linear like leaves and a drooping cluster of flowers at the top that bears 1/2" wide flowers with 5 petals, tinged with varying amounts of red stripping, The 5 anthers are also quite showy and vary from light pink to hot pink.  This species reseeds very easily and can form large colonies but they stay in flower for about a month which makes them a desirable woodland garden plant. They are pollinated by bees and the roots and corms have a sweet potato taste and are quite tasty.   The plant is named for John Clayton, a famous Virginia botanist.
Posted by Dr. Thomas Barnes 1 comment:

Plant of the Week: Harbinger of Spring (Eringenia bulbosa) 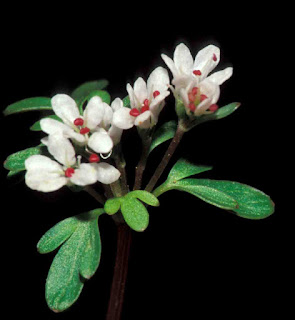 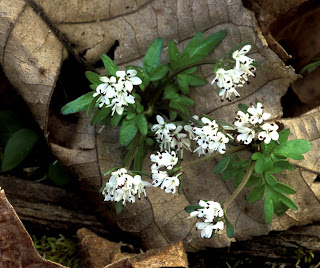 I absolutely love this tiny, dainty early spring wildflower.  It is sometimes called "pepper and salt" plant because of the white petals and anthers that turn black.  This is an easy plant to identify but is often overlooked because of its small size, usually around 3" tall at best.   It may even beginning flowering in the next several weeks and brings a spot of color to an otherwise brown, winter looking forest floor.  It has stout reddish stems that sometimes stand up tall but usually are creeping along the ground.  It has compound leaves and three leaflets for each leaf and each leaf generally has three lobes.Each flower is about 1/4" across and has 5 narrow white petals, 5 stamens, a divided white style, and no sepals and the anthers turn from dark red to black.  It has a corm with fibrous roots and usually self seeds itself and thus typically does not form large colonies. It is pollinated by small bees and flies like carpenter, Mason, halictid, and Andrenid bees and Calliphorid, Anthomyiid, Fruit,  Lance, and flower flies. As with most woodland species, this one likes rich, well-drained soils with very high organic matter and light dappled shade.  Good companion plants will be any of the woodland species that grow later and will cover up the diminutive plants later in the spring season.The genus name comes from the Greek word erigeniea which means early born, a reference to the early flowering season and the species bulbosa refers to the bulb-like rootstock.
Posted by Dr. Thomas Barnes 1 comment: 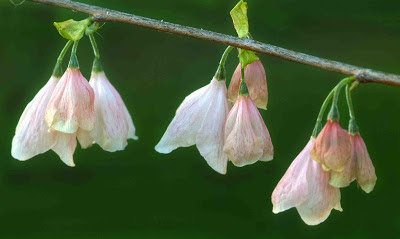 Perhaps one of the most loved small flowering trees planted throughout Kentucky is the flowering dogwood (Cornus florida).  It is a quintessential sign of spring as those beautiful white trees stick out against the background of a forest returning to green of summer.  While the flowering dogwood is an excellent landscape plant, perhaps as an alternative you might want something a little different.to provide that outstanding white color, the Carolina Silverbell.  There is nothing more delicate and showy than a Carolina silverbell in full flower. This tree has lots of interest because in the spring it has clusters of 1/2 to 1" long bells that hang below the branches, in the summer it has interested "Chinese latern" like seed pods, and in the fall it usually turns a nice yellow color. In the wild it usually occurs as a multistemmed understory species that doesn't exceed 35' tall but it can be found as a single stemmed tree growing to heights of 80 to 100'.  It flowers best with full sun to partial shade but it can tolerate quite a bit of shade and is an excellent specimen plant or focal point in the woodland garden.  It likes somewhat acidicm well-drained soils high in organic matter and doesn't care much for clay.It has dull, finely toothed, dark yellowish-green, oblong leaves ranging from 2-5" long.  Great companion plants and a special area of a woodland garden would be to have a silverbell surrounded by our native azaleas which would be very showy. It gets its name tetraptera which means 4- winged from the 4 winged fruits it produces.  There are a fair number of cultivars available in the trade and some have more pinkish flowers. This is a fairly slow growing species.
Posted by Dr. Thomas Barnes No comments: 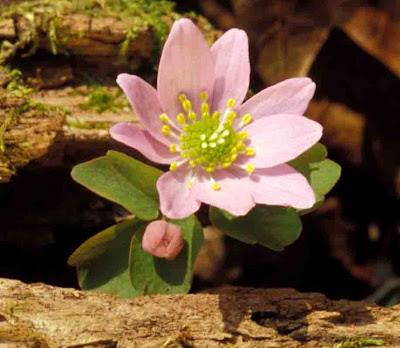 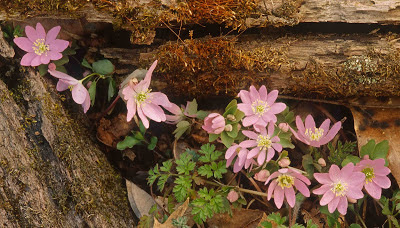 Don't let this delicate and dainty plant fool you because it is one tough native woodland wildflower that will survive almost anything in the shade garden.  It is one of the earliest to flower and in general the earlier flowers are larger and as the season progresses they seem to get smaller and more white.  Flower color varies from pink to white and range in size from 1/2 - 1" wide.  Even the foliage is showy for this species with nice reddish to pinkish colored stems and the three lobed leaves often have a rusty tinge to them.  It only grows to about 4" tall and will spread around the garden, but it takes plenty of time for this to happen.  Like most members of the buttercup family, the showy "petals" you are looking at are not petals, but rather sepals as the petals fall off the flowers in this plant family.  This plant superficially resembles the false rue anenome but that species only has 5 sepals and the leaves occur more in whorls. The scientific name arises from Greek and means, "an unknown plant that is like a Meadow Rue."  This is one of our most common woodland wildflowers and can begin flowering in March and will continue into May.  It is also quite easy to grow and while it doesn't tolerate clay, if you have organic matter and it is well drained and even somewhat dry, this species will do just fine.  Like many woodland plants, the seeds are dispersed by ants and they place them in their nest and it provides an incredible medium, rich in nutrients, for this species to germinate.  Because this is a small and dainty native plant, it will do well in the front of the native woodlands shade garden and good companion plants would be various violets (but not Canada because it is aggressive and invasive), foamflower, Jacob's ladder, or even trout lilies.  This plant is toxic although Native Americans did use it to treat vomitting and other stomach disorders.
Posted by Dr. Thomas Barnes No comments:
Newer Posts Older Posts Home
Subscribe to: Posts (Atom)