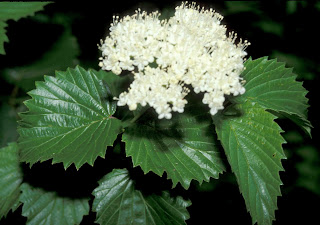 This is not the showiest of shrubs, but it is an excellent native plant for attracting birds and can be used in the back of your native wildflower garden.  It grows about 6 - 10' tall and can tolerate not only clay soils, but also the walnut tree.  It flowers typically in May and has beautiful bluish berries that the birds relish in late summer, early fall. It is especially showy in the fall when the leaves typically turn a beautiful red color.  The dark green, glossy oval shaped and toothed leaves get up to about 4" in size. To ensure good flowering every year (if you did not plant it for the birds), make sure to prune the shrub immediately after flowering since the flowering buds will form in the summer. This is one of our native viburnums that can be used to make a wonderful hedge.  It likes full sun but can tolerate quite a bit of shade, although it will not flower as profusely if planted in part-sun.  The plant gets its name because the Native Americans supposedly used the straight stems for arrow shafts. This is fairly deer resistant and the variety 'Blue Muffin' is a proven winner plant of distinction for the bright blue berries.  Other cultivars were developed for their fall color including: 'Northern Burgundy', 'Autumn Jazz' for an orange-red color, and 'Chicago Lustre' for golden yellow color.  This is one of the most disease and pest free viburnums in the market.

Last summer, I posted an item on this blog about Ticks In Kentucky. I listed some of the different kinds of ticks that live in the state, the diseases associated with those ticks, and how to defend yourself against ticks. I also addressed a question that we often receive in the Department of Entomology at UK: "Are tick populations increasing in Kentucky?"

Since then, we've seen even more evidence, both experimental and anecdotal, that tick numbers seem to be increasing. And while we have little scientific data from Kentucky, veterinarians and entomologists from states like Michigan, Missouri, and Oklahoma are convinced that tick populations are growing in number and that ticks are being found in new places. We still don't know exactly why the numbers are changing, but some scientists believe that growing deer populations, climate change, the suburbanization of the North American landscape, and even acorns may all be contributing factors.

I have not conducted any experiments on my own, but it seems like I see more ticks in Kentucky than I did a few decades ago. When I was a kid, I spent most of the 1980s wandering in the Daniel Boone National Forest in Rowan County. I was told by my parents to "watch for ticks." I would find a few every now and then. These days, when I visit the same parts of the forest, I will regularly pick off dozens of ticks. Sometimes, I find so many that I lose count, but I estimate the number to be about two hundred. When I find that many, the ticks are always very small: about the size of a grain of sand. Some people call these tiny ticks "seed ticks" or "turkey ticks." These small ticks are the immature stage of the Lone Star Tick—none of the other ticks in our area regularly attach themselves to humans while they are in the immature stage.

Luckily, these tiny ticks—which seem to be the most common in our area, and which are the ones that I run into almost exclusively in the woods—are not known to be associated with Lyme Disease, Rocky Mountain Spotted Fever, or any other major pathogens. (Identification can be tricky, though, so any tick should be removed as soon as possible.)

So, tick numbers may be on the rise. But there's one thing that hasn't changed: tick-safety! It is fairly easy to protect yourself, your family, and your pets from tick-borne illnesses, and you can read all the details in our online factsheet: Ticks and Disease.

Posted by Blake Newton No comments: 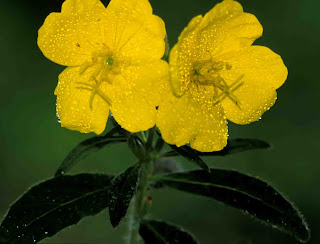 Sundrops or Southern Sundrops as it is sometimes called is a delightful, bright, showy member of the evening primrose family. It is a day flowering, not evening or night flowering member of the Onagraceae.  This is a tough plant that likes average soil and moderate moisture, but will do just fine and can tolerate poor soils.  It likes sun but can tolerate some shade.  It grows to about 18" tall and will slowly spread via rhizomes. This is quite a showy plant with 4 bright yellow petals in the flower that only persist a day or so but new flowers appear daily for a continuous show for several months.  It has 1 - 3" lance shaped leaves.  It is, for the most part, disease, deer and insect pest resistant. If it likes where it has been planted and the conditions are good, it can spread aggressively, though this is usually not a problem.  The genus name of Oenothera comes from the Greek "Oïnos" meaning wine and "ther" meaning wild animal.  One of the interesting pieces of folklore is that this plant has magical powers that made hunters lucky and the American Indians used to rub their moccasins in it to mask their smell to get closer to game.  The Germans felt when the roots were soaked in wine you could tame wild animals and the roots were thought to be very nutritious.  I love this plant growing with purple coneflowers and butterfly milkweed.  There are several varieties on the market including 'fireworks'  which is a more compact form. The variety 'Youngii' is a bit more showy with bright red buds and leaves that turn scarlet red in the fall.
Posted by Dr. Thomas Barnes 2 comments: 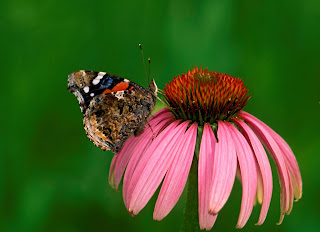 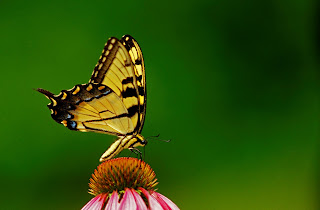 This outstanding native perennial has been in the nursery trade for decades and today you can get them in almost any color under the sun.  However, from the native plant garden aspect, the true purple coneflower is the species you want and you do not want any of the hybrids or cultivars if you wish to attract butterflies.  Why?  The primary reason is that those other plants are not breed or cloned for high nectar production to attract the native pollinator, or butterfly.  This is a great butterfly plant and you will likely see red admirals, giant, spicebush, gulf, and tiger swallowtails, great spangled, meadow, and variegated fritillaries, pearl crescent, viceroys, American coppers, and numerous skippers.  This species grows from 2 to 4' tall with a spread of about 1.5'. It begins flowering in June and will continue blooming much of the summer and in late summer, the American goldfinches come in and teach their youngsters how to get the seeds out of the center of the flower. This plant does well in average to dry and well-drained soils with full to part sun.  The plants will need to be divided about every 4 years. It should re-bloom without deadheading, but deadheading will send this plant into overdrive with respect to flower production.  This species has also been reported to have a wide variety of medicinal properties including a cure for the common cold, improved immune system function, as a mouthwash for mouth ulcers and gingivitis, and has anti-bacterial, anti-fungal, and anti-viral properties.  As with all herbs, you should consult your primary care physician prior to using it for any health purpose.  This is a great plant and good companion plants include black-eyed Susans, bee-balm, blazing-stars, and early goldenrod.  This is one of the easiest and showiest of all native sun-loving perennials to grow.  It has few disease or pest problems and the name Echinacea is from the Greek word echinos which means hedgehog (the spiny center cone).
Posted by Dr. Thomas Barnes 1 comment: 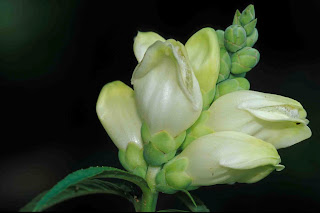 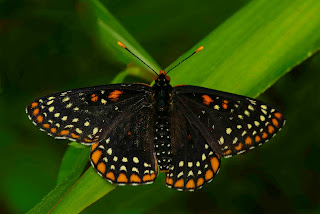 Look closely at the turtlehead flowers and yes, each individual flower in the cluster does resemble a turtles' head.  There are two distinct species in the state, C. glabra (White) and C. oblique (pink or purple).  White turtle head is considered infrequent and the two subspecies of pink are either endangered or special concern.  They are both obligate wetland species which means they must live in a wetland habitat (but do well in urban soils because they are similar in nature to wetland soils). They belong to the snapdragon family or Scrophulariaceae which includes other plants such as beard tongues, Indian paintbrush, false foxgloves, hedge hyssops, veronicas, and monkey flowers. Many members of this plant genus are associated with wetlands. Turtleheads are stiff plants without hairs (glabra) and have opposite, toothed, narrow leaves on a square stem.  They like to keep their roots moist to wet and grow in partial sun. The flowers occur in late summer and are irregular, two-lipped and grow in dense clusters.  In the garden this species does well at the edge of the woodland garden as long is it is heavily mulched to keep moisture in the soil.  This plant gets its name from Greek mythology. A nymph named Chelone had insulted the Gods and for her punishment she was turned into a turtle.  The species name of glabra is Latin for smooth.  This is also the primary host plant for the Baltimore checkerspot butterfly shown above.  This is a rare species in Kentucky and home owners attempt to attract it by planting turtle head, but usually to no avail because it naturally occurs in wetlands and is only found in a few rural locations around the state.  Furthermore, it only has one flight in late May to June and the larvae over winter in rolled up leaves on the ground and they have a very high mortality rate because they often fall off the tips of the leaves of the host plant.  Hence you need to beware when looking at native plant nurseries that indicate this is an attractive species for butterflies, because most do not nectar on the plant and the Baltimore checkerspot is the primary species that uses it for a host plant. This species is primarily pollinated by nectar seeking bumblebees.  It is primarily deer resistant and has no serious insect pests or diseases.