Nandina berries are toxic to birds. 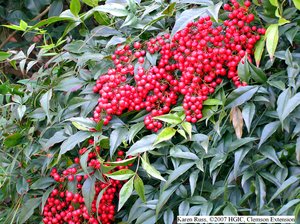 How many books, articles, and other materials have you read that says to plant Nandina, Heavenly Bamboo, or Sacred Bamboo (Nandina domestica) to attract and feed birds in the late winter?  This plant is classified as a noxious weed by the U.S. Department of Agriculture and many states list it as a noxious-invasive weed because it escapes readily from the home landscape.  It is used as an ornamental because of the dark glossy green leaves and bright red berries that persist throughout the winter. It is still used, in large numbers by the horticultural industry and landscapers and is a recommended landscape plant by University Extension programs across the country.   Unfortunately this species, which has escaped from cultivation, is highly toxic to birds. The bright red berries contain cyanide and other alkaloids that produce highly toxic hydrogen cyanide (HCN) which is extremely poisonous to all animals. Sudden death may be the only sign of cyanide poisoning and death usually comes in minutes to an hour.  The deaths of cedar waxwings in Georgia that were necropsied at the Vet. school showed hemorrhaging in the heart, lungs, trachea, abdominal cavity and other organs.  This is a horribly painful method of death for a bird or any other animal.  Bird deaths in the Houston, TX area and other parts of the country have also documented the death of songbirds as a result of eating these berries.
Posted by Dr. Thomas Barnes No comments: 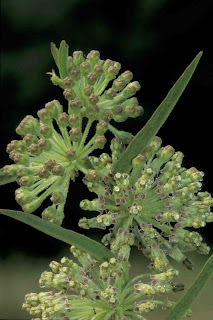 This is one of the lesser known milkweeds found in western Kentucky and is considered rare which is probably why it is not very well known.  However, like most other milkweeds it is a magnet for monarch caterpillars.  I really like the delicate nature and color of the flower clusters on the 1 1/2 - 3' tall species that has light greenish to reddish stems that are soft and hairy.  It has narrow leaves that are 2 - 6" long and 1/2" across.  It likes full sun and can tolerate moist to dry soil that is sandy, gravelly, loamy or clay-loamy.  The primary pollinators for this species are long-tongued bees and wasps although small butterflies and skippers will also pollinate it.  It is a host plant for several unique moths and is not eaten, usually by deer and other mammals, because it has that waxy, latex sap that is bitter to the taste. The seed floss or fluff of the plants in this genus was used by American colonists as pillow stuffing and was collected during WWII by school children for use in life-preserves. Since this plant prefers sandy soils good companion plants would be Indian grass, prairie sage (Artemesia ludoviciana), white false indigo, and rough blazingstar. 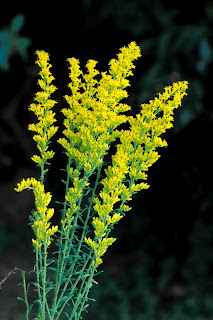 This has to be one of my favorite goldenrods because it only gets about a foot high in poor soils and 2' tall in more fertile soils.  It forms a nice clump and the leaves are grayish-green with bright yellow spikes of typical goldenrod flowers.  It can tolerate sandy, rocky, and clay soils and generally speaking, the poorer the soil, the better the growing conditions for this species because it will die out in Central Kentucky in good, rich, fertile soil.  This is a relatively easy species to grow and has a few potential problems in the garden including spot anthracnose, powdery mildew, rust, and fungal spots when growing in moist conditions (which isn't recommended).  Like most goldenrods, insects absolutely love this plant.  Long-tongued and short-tongued bees, wasps, flies, butterflies, beetles and moths all collect pollen or nectar.  This is an excellent plant for honey bees. Several different moths feed on the foliage and American goldfinches will eat the seeds.  Native Americans used this after it had been boiled to treat jaundice and kidney disorders in addition to using it topically to treat burns and skin ulcers.  The Navajo used the seeds for food and they burned the plant like incense. This species also makes an excellent cut flower or dried flower for various arrangements. Good companion plants would include some of the lavender asters like aromatic, blazing stars, and autumn sage.
Posted by Dr. Thomas Barnes 1 comment: 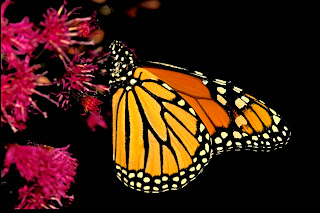 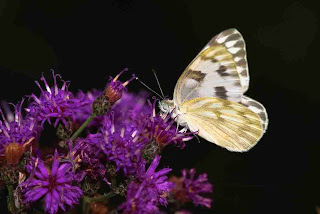 Most agriculture folks consider tall ironweed as just that, "a weed."  I guess because it can take over pastures and cows won't eat it.  However, from a native plant standpoint, this 3 - 7' tall weed puts on a spectacular show and is a great butterfly attracting plant especially for migrating monarchs.  This is a highly variable species and will readily hybridize with V. missurica (only in the far western regions along the Mississippi River in Kentucky).  We also have another rare species in the state, New York Ironweed (V. noveboracensis).  Ironweed loves moist soils but will tolerate pretty much most soil types found in urban environments.  Flower color varies from deep purple to light purple and even purplish-red.  The leaves can be up to 10" long and 2" wide and are arrowhead shaped, in general, with serrated edges. The leaves are either sessile or have a short petiole where they attach to the stem which is usually slightly hairy.  The flower clusters have been 10 and 30 disk florets but no ray florets.  Each floret has 5 tubular recurved lobes (just the right length for its pollinators of bee flies, butterflies, long-tongued bees, and skippers.  Mammals leave this plant alone because it has bitter tasting foliage.  The root system is fibrous and rhizomatous and each rhizome can produce several plants.  My recommendation for keeping this tall growing plant at a reasonable size is to cut it back in mid-June.  This plant works well with goldenrods and yellow wingstem (both of which would probably need to be cut back as well) and if you want a butterfly paradise, place it in combination with joe-pye-weed, goldenrods, and boneset.  This plant is an excellent self-seeder and in the garden the flower heads should be dead-headed to prevent unwanted plants from popping up everywhere. 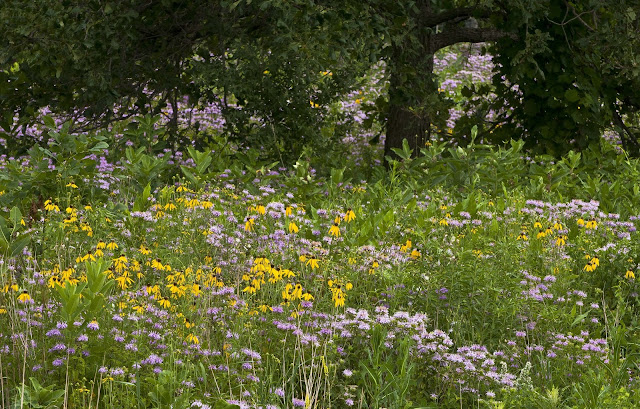 This week there are two plants of the week because they should definitely be grown together and provide a color palette that is outstanding (yellow and lavender).  I guess my reason for talking about these plants comes from my recent trip back from South Dakota where these plants dominate the tall grass prairie and roadside plantings in Illinois and Iowa.  Both species obviously flower about the same time (actually in mid-summer here in Kentucky) and are for the most part disease resistant (although wild bergamot has a tendency to develop powdery mildew) and can tolerate the typical nasty clay soils of urban development. They are also tolerant of deer browsing and are excellent cut flowers, even providing some nice fragrance in the process. Finally, these two species are easy to grow and establish and will flower for an extended period of time.  Both like full sun and can tolerate a wide range of soil conditions.  Because these grow up to 3 - 4' tall, never fertilize or water them and if grown together, there is no need for staking as each other will provide support.  The primary pollinators of the yellow coneflower are various bees some wasps and small beetles and butterflies.  This is a host plant for the silvery checkerspot butterfly.  Bergamot has an oregano-mint scent and is visited by ruby-throated hummingbirds, hummingbird moths, skipper and swallowtail butterflies.  The primary pollinators are long-tongued bees. This species was, and is still, used to make a tea (usually with honey added because the flavor is so strong) to ward off colds and one of the common names, bee-balm refers to its antiseptic uses as an ointment.
Posted by Dr. Thomas Barnes No comments:

The Unusual Cardinal at the Feeder

This seems to be the year of the bald cardinal.  I can't remember receiving this many calls about the strange cardinals folks have been seeing lately.  What are these birds and why is this happening?  These are just regular cardinals but at this time of the year the birds go through a process called molting.  Molting is nothing more than feather replacement.  In this case, the best explanation is that all the feathers molted at one time, giving the appearance of a "bald" bird.  Most of these birds are most likely young of the year, or juvenile birds, that are undergoing their first molt.  Normally feathers are molted a few a time and it is unknown why this phenomena seen in the photos occurs.  There is not a large amount of research on the topic but it also appears that feather mites or lice may cause the condition as the head is one area that the birds can not reach to "preen" to remove the tiny bugs.  The final explanation may be some unexplored nutritional or environmental contaminant problem.  For whatever reason, there is no need to worry because by the next molt the feathers will return and your beautiful red cardinals will not be bald any longer, unlike the author of this blog, who lost his hair at age 18 and it has never returned!!  Now that's a long molt!
Posted by Dr. Thomas Barnes No comments:
Newer Posts Older Posts Home
Subscribe to: Posts (Atom)