The smooth rock skullcap (Scutellaria saxitallis) is uncommon or rare throughout its entire range which goes from Pennsylvania west to Indiana, south to Arkansas and east to the coast, excluding Florida. It has a global and national ranking of 3 which indicates it is vulnerable to extirpation.  It is threatened in Kentucky and Tennessee and Endangered in Pennsylvania, Indiana, and Maryland. According to the U.S. Forest Service, about 60% of the entire population nationwide occurs on protected land. The primary threat to the species is from logging or loss of forest canopy in some areas, and invasive, exotic plants in others.  This species is generally considered a plant of rich, moist woodlands; however, it does occur in openings in the Great Smoky Mountains, along roadsides in West Virginia and in Ohio it can be found in open shade or semi-shady areas.  It generally appears to like sandstone but I have seen it growing in shale and limestone here in Kentucky and the sites are often quite rough and rocky.  The one thing it does not like is competition, hence it is an excellent candidate for the semi-shaded rock garden.

Unlike many of the other skullcaps, this species does not stand upright but is rather decumbent or lays on the ground.  This is also a species that has an extended flowering period and begins in June and those in Kentucky gardens are still in flower on September 1st.  This is not a large, robust plant but rather gets about 18" tall and more likely is about a foot tall and can be differentiated from other skullcaps by its decumbent nature and cordate leaves, flowers that occur in terminal or accessory lateral racemes, a corolla tube without the terminal ring of hairs, and a slightly glaborous stem.  It is most commonly confused with S. ovata but the later species has pubescent stems, does not recline, has longer leaves, and well differentiated racemes.

In the garden this plant can be used in semi-shade to shady habitats that are dry, rocky and well-drained with little to no competition.  Hence it should be promoted for use in a rock garden.  It would appear that the soil should be somewhat acidic but not strongly such that our limestone soils can be easily ammended.  Excellent garden companion plants might be Allegheny stonecrop (Sedum telephiodes), Nevius stonecrop (Sedum nevii), cliff stonecrop (Sedum glaucophyllum), Addison's clematis (Clematis addisonii), pussytoes (Anntenaria spp.) or branched whitlow-grass (Draba ramosissima). The only known nursery source I know of is Enchanters Garden located outside Hinton WV and run by Peter Heuss at www.enchantersgarden.com 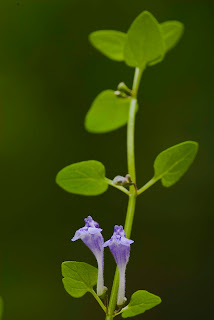