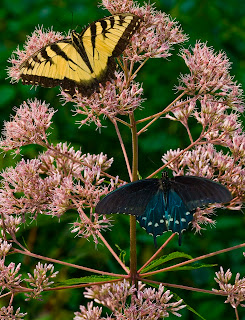 Tiger and pipevine swallowtail on hollow stemmed Joe-pye-weed
There are four native Joe-pye-weed species in Kentucky.  Two are rare and two are common.  The rare ones include E. maculatum (spotted) and E. steelei (Steel's) and are known from only the true mountains in southeastern Kentucky. The other two species, E. purpureum (purple node) and hollow-stemmed (E. fistulosum) are both common and occur statewide.  The way to tell the two common species apart isn't that difficult because one has a hollow stem and occurs in wet meadows, woods, and along streams and the other has a dark purple stem at the internodes and occurs in dry to moist woods.  There is no question the best species of the group for butterflies is hollow stemmed and is probably the best for the garden, although the most difficult to find in the nursery trade.  Lots of folks carry spotted (which has more of a flat top compared to the convex form of a flower head) but far fewer carry hollow stemmed. The reason that spotted, particularly "Gateway", is more popular is that it only grows to 4 to 5' tall. I think the reason hollow stemmed isn't as popular is that it can grow to 10-12' given the right growing conditions and spreads via underground rhizomes.  Therefore, its use in the garden is in the back of a perennial bed or to use as a screen. If you want to make it more compact, cut the stems in June although this will typically lead to flowering a little later than normal.  To ensure long-term viability, it is probably necessary to thin or divide the plants on a regular basis (it does root easily from division or even stem cuttings).  This is one of the great swallowtail butterfly attracting plants because the flowers appear at the time when the last brood of this butterfly group is hatching and it has numerous small flowers that are packed with nectar.  The best growing conditions for hollow stemmed is moist to wet although it will do fine in average garden soil.  Spotted is far more forgiving and can be grown in any fertile, average garden soil.  To ensure maximum nectar production be sure to grow this species in full sun.  The other nice attributes of the Joe-pye-weeds are there lance-shaped leaves that occur in whorls and the seed heads that provide winter interest.  Supposedly this plant gets its name from a Native American medicine man named Jopi who lived in the northeast around the time of the American revolution.  It is said he sold various herbal remedies and used this species to treat typhoid fever.  This species occurs pretty much throughout the eastern United States and typically flowers in September.  Try growing this with some boltonia and goldenrod in the foreground.
Posted by Dr. Thomas Barnes