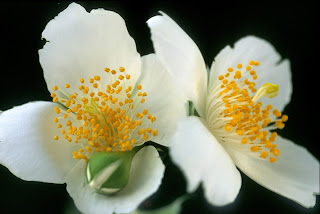 The natural habitat for our native mock-orange shrubs are limestone cliffs, often associated with the Cumberland River system.  We have three native species, P. inodorus which is perhaps the showiest of all three, P. hirsutus, which has much smaller more whitish-cream flowers, and P. pubescens var. intectus and var. pubescens, which has more than five flowers in a cluster and can be a large shrub.  All the native species are considered rare, threatened or endangered.  The scentless mock-orange is a spectacular specimen plant with clusters of one to three (usually) 1" diameter flowers with between 60 and 90 stamens in a flower.  This is important because it superficially resembles the European mock-orange (P. coronarius) which has between 20 and 50 stamens per flower and has a strong fragrance.  This species has escaped cultivation and persists in the wild in Kentucky.  The 2 - 4" long ovate shaped leaves are simple and opposite and the entire plant can reach a height of 10'. The mature bark is often gray but can become more of a mahogany color over time.  It flowers most profusely in the sun but grows equally as well in the shade.  The best location would be a mixture of dappled shade with 4 hours or so of full sun. It definitely likes calcareous or neutral soils and in parts of the state with acidic soils they must be amended with lime for this species to grow. It ranges in nature from Canada to Florida.  This species could be used as a specimen plant, or even better as a showy hedge or backdrop for a wildflower garden.  When purchasing make sure you do not get the European species.
Posted by Dr. Thomas Barnes