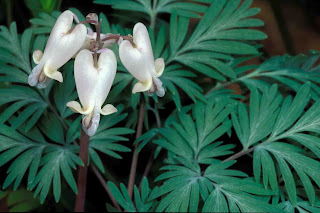 The foliage of this early spring wildflower is easily mistaken with the foliage of its close cousin, Dutchman's Breeches (D. cucullaria). The easiest way to tell the plants apart is via the flowers, but the leaves of squirrel corn are typically shorter and there is one compound leaf per flowering stem compared to Dutchman's breeches which has longer leaves and there are typically two leaves per flowering stem.  In addition, squirrel corn leaves have a tendency to have a more "open" appearance.  Like many members of the fumitory family, these plants are highly toxic and make for good garden plants because mammals, even deer, do not like to graze on them.  The leaves appear early in the growing season and completely disappear by mid-May but they can form dense colonies when established in the garden.  The plants are typically about 6" tall and squirrel corn gets its common name from the underground food storage structures that look like corn kernels.  The flowers are quite distinctive and look like small hearts and the plant is named Dicentra which refers to the two spurs on the flowers and canadensis means from Canada.  This plant is easy to grow in the garden and it is one of those species that must be interplanted with ferns or later blooming species because it is so ephemeral in nature.  Squirrel corn had great significance as a Love Charm to the Mennominee Indians and a young man would throw the flowers to his intended love or chew the roots which gave a perfumed smell in the face of the woman causing her to follow him from that time forward. The Onondaga called this plant the "Ghost corn" believing it was "food for the spirits." Like trilliums, the seed of this group is dispersed by ants because the seeds contain a fatty substance called elaisome, which is highly relished by ants.  At the nest the elaisomes are eaten and the seeds are left to germinate.  The plants are primarily pollinated by bumblebees.  Hisotrically the plant was used as a tonic and for use in treating syphlis.
Posted by Dr. Thomas Barnes